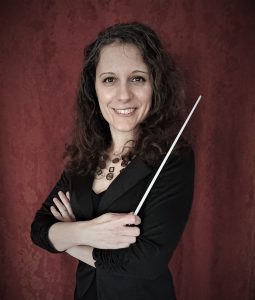 Eszter Horváth grew up in the orchestra as a violinist and violist. Originally from Hungary, she settled in Canada with her parents when she was 9. Eszter started studying conducting in high school, and has been conducting amateur and semi-professional orchestras in Toronto and Halifax. She was a finalist for the assistant conductor position with the Winnipeg Symphony Orchestra in May 2019.

Eszter received her MMus in Orchestral Conducting from the University of Toronto in 2018, studying with Uri Mayer (orchestral), Dr Gillian MacKay (instrumental), and Dr Hilary Apfelstadt (choral). Besides conducting as a student and teaching assistant at the University of Toronto, she has guest conducted in the city for Orchestra Toronto, CAMMAC, and is the assistant conductor for Hart House Orchestra. In Halifax, she has guest conducted several concerts with Nova Sinfonia and the Chebucto Symphony Orchestra. Eszter has worked with staged opera as music director and conductor for Mozart’s Così fan tutte with the Halifax Summer Opera Festival in 2016, and Cavalli’s L’Egisto in 2017. In 2019, she was the music director for a production of Brundibár with child performers and a professional orchestra made up of members of Symphony Nova Scotia, for which she was nominated for a Theatre Nova Scotia Merritt Award for Outstanding Musical Direction. In Michigan, she has studied with Kenneth Kiesler privately and at the Conductors Retreat at Medomak.

Eszter inherited a love of historically informed Renaissance and Baroque music from her father, and she is the past president of the Early Music Society of Nova Scotia. As an adult, Eszter started exploring outside the orchestral world and added vocal music to her repertoire. Having now worked professionally both as a violinist and a choral/chamber singer, Eszter is equally at home in the orchestral and choral worlds. She was the interim music director at the Cathedral Church of All Saints in 2014–15, and at St. George’s Round Church in 2010–11 (Halifax). She was associate conductor of the Nova Scotia Youth Choir in 2013 and 2014, and founded the Early Music Society of Nova Scotia’s Madrigal Group in 2012. She is a founding member of Halifax’s professional a cappella quintet, Helios Vocal Ensemble.  [Link to www.heliosvocal.ca]

Eszter is fluent in Hungarian, German and English, and has a working knowledge of French. Since graduating from the University of Toronto, Eszter splits her time mainly between Halifax and Ann Arbor, MI, where her husband recently moved for starting his career in battery research.